The exhibition "L'Italia in Europa - L'Europa in Italia" 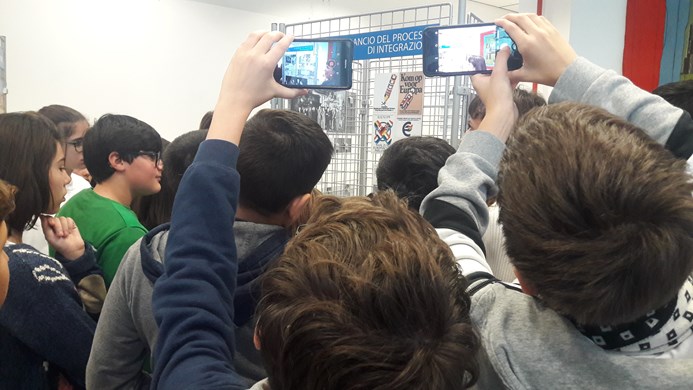 The exhibition "L'Italia in Europa - L'Europa in Italia" ("Italy in Europe - Europe in Italy"), designed and launched in 2011, was reorganised and enriched. Thanks to the collaboration with the Ansa - national press agency - new contents have been added and the media language has been modernized in order to better involve the younger generations also through the use of new technologies.

The exhibition was opened on 22 March 2017 in Rome in the context of the celebrations for the 60th anniversary of the Treaties of Rome. It retraces the most rilevant moments of the European integration from the Cold War to the present days: images, videos and original testimonies offer the opportunity to learn not only about the construction of the Union and the role played by Italy in this process, but also above all about the "added value" of being European citizens.

The 2017 edition of the exhibition has been enriched with an augmented reality project: the dedicated app ("Italia in Europa - Europa in Italia" on Apple Store, "litaliaineuropa" on Play Store) makes the visitor travel across a time-machine-like experience opening the doors to the main events that have marked the European integration, as well as to the international political and social facts that have characterized the last decades of our history.

This interactive visit also enables the visitor to browse through the catalogue and enjoy more in-depth multimedia content: with your mobile device (smartphone or tablet) just search and frame the works marked with the play icon on photo to activate the special content.

The exhibition consists of 100 photos and images and of 29 multimedia contents divided into periods of 10 years: every decade is enriched by two video clips focussing on world events, topics and social phenomena of that time. Contents come from the Photographic Archives of the Ansa, national press agency.

The exhibition is part of the Department for European Policies's institutional activities aimed at communicating Europe at a national and local level with the objective of raising awareness, especially amongst the younger generations and stimulating debate and reflection on the future of the European building process.

Download the Exhibition Catalogue [.pdf, 11,8 Mbyte - ed.2020] and search for the photos marked with the play icon, frame it with your smartphone or tablet: you have your a special content playing on your device!