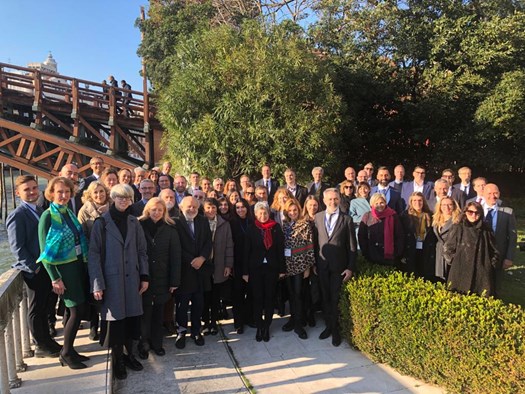 Founded in 1986 in the lagoon city, the Club of Venice is an informal body that gathers the heads of institutional communication of the EU Member and candidate States and the European institutions (Commission, Parliament and Council).

The Club is an outstanding instance of collaboration and exchange of best practices for institutional communication experts. The Membership for Italy is ensured by the Department for European Policies, in charge of coordinating communication on Europe at national level. 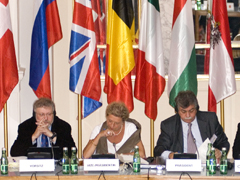 The founder and honorary president of the Club is Stefano Rolando, whilst Vincenzo Le Voci (Council of the EU) is entrusted with the task of coordinator and secretary general. The Club meets twice a year in plenary session to discuss topics of common interest, exchange information on the best communication strategies, plan and implement public information campaigns.

The first of the two plenary sessions usually takes place in spring, in the Member State holding the Council of the EU's Presidency; the second one is generally held during the autumn in Venice, where the Club was founded.

In recent years, the Club has discussed all institutional communication topics such as EU enlargement, the election to the European Parliament, and main crisis situations (terrorism, earthquakes, migration flows, etc.), as well as EU communication policies and strategies (e.g., countering euroscepticism, regaining citizens' confidence, involving young people, etc.). Major events (the Olympic games, the World Expo, the referendum on the Lisbon Treaty, the UN conferences on climate change, the Brexit, etc.) have been analysed from the institutional communication's point of view also with the aim to promote the exchange of information on the new technological and non-technological tools, nowadays available to public communicators.

In 2007, on the fiftieth anniversary of the signing of the Treaties of Rome, the autumn plenary session was held exceptionally in Rome, the city where the Treaties were signed, at the Palazzina Algardi-Villa Doria Pamphilj. Rome hosted the Club again in 2014, during the Italian Presidency of the Council of the European Union, in the Council Chamber of the then Ministry of Cultural Heritage and Activities and Tourism.

Another "special edition" of the Italian plenary took place in Milan in 2015, in conjunction with the World Expo, where the Club's members had the chance to cross their experiences with those of the communicators of the world’s fair.

Since 2016, the autumn plenary session has been back in Venice, the city where it all began.

Plenary sessions of the Club of Venice