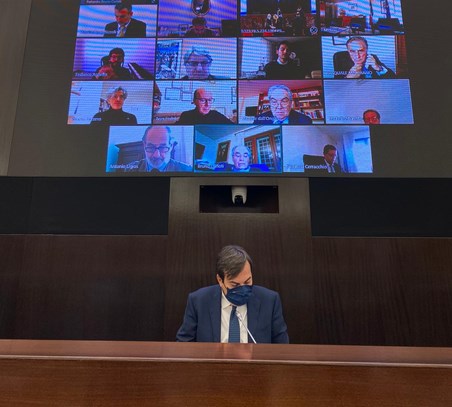 On the occasion of an online ceremony held on 11 November 2020, Vincenzo Amendola, Minister for European Affairs, and Gaetano Manfredi, Minister for University and Research, awarded the talented winners of the national contest "Europe is like an orchestra, music has no borders" in memory of Maestro Bosso, sadly passed away on 15 May this year.

The contest, launched by the Department for European Policies (DPE) within the Presidency of the Council of Ministers, and by the Ministry for University and Research (MUR), was open to students from Music Higher Institutes and Courses accredited by MUR.

Candidates had been requested to submit an individual original music composition, with or without text, in harmony with the leading theme of the contest. The initiative, aimed at promoting the idea of Europe through music, is inspired by Maestro Ezio Bosso, who always declared himself strongly pro-European.

"Being a strong pro-European - Minister Amendola declared - Ezio Bosso would often say that “Europe is like an orchestra”. For this very reason, Minister Manfredi and I jointly decided to honour his memory and award national music talents. Bosso’s genius continues to live in the gestures of those who every single day fight and never give up. By awarding the first three winners, we also open a new season that will certainly flourish in the coming years and lead to further editions of this initiative to recall and celebrate a great Italian, a great European".

"The initiative – Minister Manfredi underlined – focuses on the power of creativity, on the desire to get involved and express oneself in an international dimension, even in such difficult times as the ones we are now experiencing. We award the skill to convey one’s talents into new languages to be disseminated and shared following the example of Ezio Bosso, a great artist who would sincerely and passionately put his orchestra, his music and his values always before himself and at the service of others".

The winners of the first edition of the "Maestro Ezio Bosso National Music Contest" are:

The winners were selected by a jury composed of distinguished musicians such as Michele dall'Ongaro (President), Giorgio Battistelli, Ivan Fedele, Marco Angius, David Romano, and Bruno Carioti. The Department for European Policies was represented by Anna Maria Barbarito and Daniela Sacco Casamassima.

The three composers will be awarded a two-thousand-euro grant each, made available by the Department for European Policies at the Presidency of the Council of Ministers.

The three winning pieces will be played by the National Orchestra of Italian Conservatories on the occasion of an event to be organised consistently with the evolution of the Covid-19 health crisis.