Undersecretary Amendola in Vienna: Italy and Austria together for European unity 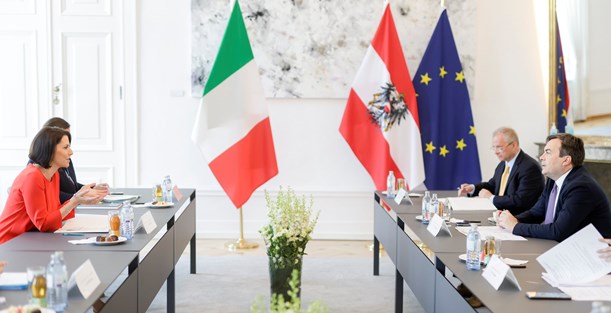 First day of institutional meetings in Vienna for the Undersecretary for European Affairs, Vincenzo Amendola. “Italy and Austria are strengthening cooperation at European level on crucial dossiers such as Ukraine, sanctions against Russia and a common energy union. Only united will the EU be able to overcome this terrible ordeal,” Undersecretary Amendola commented at the end of his visit, accompanied by the Italian Ambassador to Vienna, Stefano Beltrame.

In the morning, a bilateral meeting was held with Federal Minister for the EU Karoline Edtstadler (pictured) in view of the forthcoming European Council in May, which will see the main current challenges on the table: security, energy, and the European response to the crisis triggered by the armed conflict. European migration policies, EU enlargement, and respect for the rule of law were also among the topics at the centre of the talks.

The mission then continued at the Austrian Parliament where Amendola was received by Pamela Rendi-Wagner, President of the Austrian Social Democratic Party and of the Foreign Affairs Commission, with whom he also discussed humanitarian reception.

In the afternoon, Undersecretary Amendola held another bilateral meeting with Leonore Gewessler, Minister for Climate and Energy, to discuss the impact of the war on green and digital transitions, as well as the issue of transit along the Brenner road route.

In the evening, Amendola moved to Bratislava for the second round of institutional appointments that will take place tomorrow. During his visit, he also met a delegation of Italian entrepreneurs in Austria.