Undersecretary Amendola, “The Conference on the Future of Europe opens the reform agenda: Italy will rise to the challenge” 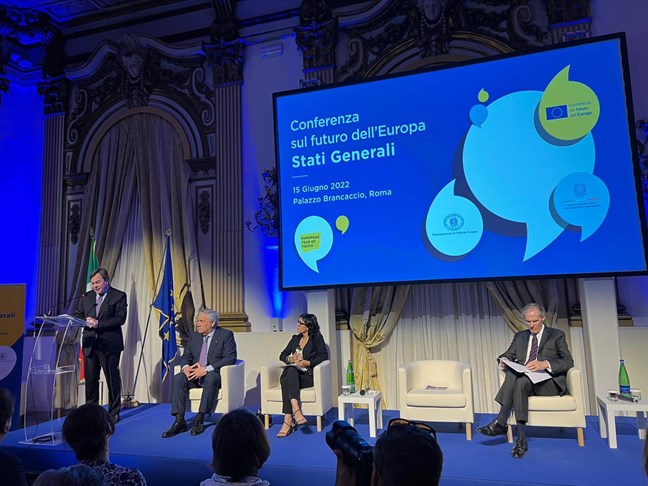 The Conference on the Future of Europe "has been a year-long journey, born out of the need to look to a future for our continent, for our Union, in the face of so many challenges such as the transition to a sustainable economy for the climate impact and of the digital transition for the transformation of the world of work, of consumption, of citizenship. These two great 'revolutions' need a protagonist, namely liberal democracy, which is their pre-condition". Vincenzo Amendola,  Undersecretary for European Affairs, stated it at the States-General of the Conference on the Future of Europe held this morning at Palazzo Brancaccio, Rome.

The States-General were organised by the Department for European Policies, in collaboration with the Ministry of Foreign Affairs and International Cooperation, to illustrate the outcomes of the Conference ended on 9 May with the delivery of the Final Report to the Presidents of the Commission, Parliament and Council. But also to listen to the protagonists of the Italian initiatives promoted in the course of these months, which took concrete form in the many ideas and proposals presented for the Conference.

"The 49 recommendations that emerged from the work of the Conference on the Future of Europe are under scrutiny by those who, like us, want to open the reform agenda," Undersecretary Amendola explained today. The EU must rise to a difficult role and make EU development and citizens protection match their needs. The recommendations are a legacy contributed by Italy, which provided a top number of inputs to the multilingual digital platform that made the European agora open to the ideas and proposals of all citizens in order to build a participatory democracy”.

"The Conference on the Future of Europe gives us the right impetus to build a new, sound and united Europe. It is time to open the reform agenda of the Treaties. And Italy will be up to the challenge."