States-General of the Conference on the Future of Europe 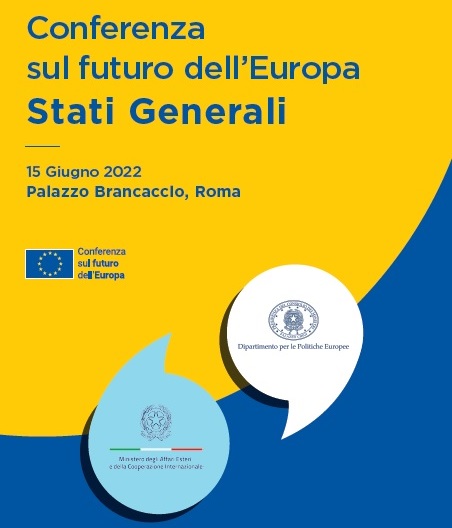 The Department for European Policies, in cooperation with the Ministry of Foreign Affairs and International Cooperation, is going to hold the “States-General of the Conference on the Future of Europe” on Wednesday 15 June from 9:30 a.m. to 1 p.m.

The event, which will take place at Palazzo Brancaccio in Rome, follows just over a month after the delivery of the Conference's Final Report to the Presidents of the Commission, Parliament and Council in Strasbourg on 9 May 2022. The ceremony concluded an unprecedented participatory democracy exercise in which Italy was remarkably active and proactive, so much so as to be ranked among the first Member States as to volume of contributions posted on the Conference's multilingual digital platform.

Such a result was achieved thanks to the valuable contribution of institutions, universities, Europe Direct, citizens, and the numerous associations that animated the discussion on the occasion of the activities put in place by the Government. The work carried out is summarised in a Final Report that will be distributed during the “States-General of the Conference on the Future of Europe”.

The aim of the event is to illustrate the results of the debate to all those who have participated in the Government's activities and to listen to the protagonists of the initiatives promoted over recent months, which took concrete form in the multiple ideas and proposals presented for the Conference.

The States-General will be structured in three sessions. The first will convey greetings from political and institutional authorities: Luigi Di Maio, Minister for Foreign Affairs and International Cooperation, Vincenzo Amendola, Undersecretary for European Affairs, Fabiana Dadone, Minister for Youth Policies, Antonio Tajani, President of the Constitutional Affairs Commission of the European Parliament, Christian Masset, Ambassador of the French Republic to Italy, and Roberto Gualtieri, Mayor of Rome Capital City. Dubravka Šuica, Vice-President of the EU Commission and Commissioner for Democracy and Demography, will take part via video message.

The second and third sessions will be dedicated to illustrating the outcomes of the Conference on the Future of Europe with speeches by, among others, citizens’ ambassadors, university students, representatives of civil society and associations/organisations involved in the numerous initiatives. The closing remarks will be delivered by Paola Taverna, Vice-President of the Senate and representative of the Senate at the Conference on the Future of Europe, and Benedetto Della Vedova, Undersecretary of State for Foreign Affairs and International Cooperation.

Conference on the Future of Europe